Subjectalism and Neo-Materialism - The War for Reality In ancient Greece there existed a place, a site known as the Agora, an area of the city where free-born citizens gathered to listen and debate current matters of civic, political, and social pertinence. Amid the hustle and bustle of merchants and craftsmen, traders and beggars, the life of the city gave birth to philosophical speculation in the likes of Protagoras, Socrates, Diogenes, as well as great statesmen like Pericles. These citizens, and I do mean citizens in the sense of a political assembly of free peoples as a collective, a community of interest based as it is in open and participatory, communicative dialogue: it was out of this communicative matrix that most of the struggles we face today emerged. Reason itself as we have come to know it had its birth here in the sense of becoming something that people discussed and spoke of and contested. As Max Horkheimer once said:

The ancient Greeks considered wisdom to be an important virtue, personified as the goddesses Metis and Athena. Athena is said to have sprung from the head of Zeus. She was portrayed as strong, fair, merciful, and chaste. Even then the defining aspect of philosophical speculation was based on the darkening of citizens by the power of superstition and ignorance, and the empowerment and emacipatory power of φιλοσοφία (philosophia), which literally means "love of wisdom". 2  This permeates Plato's dialogues, especially The Republic, in which the leaders of his proposed utopia are to be philosopher kings: rulers who understand the Form of the Good and possess the courage to act accordingly. Aristotle, in his Metaphysics, defined wisdom as the understanding of causes, i.e. knowing why things are a certain way, which is deeper than merely knowing that things are a certain way. All of this lead to the battle over just what reality is.

Even at that time the two founding schools of philosophy the Academy and the Lyceum, based on the life and writings of their respective founders Plato and Aristotle battled over if not exactly opposing views then at least differing versions of the real world. For Plato the universal essence, the Idea, the Form of a thing, is more real and thus more important than its physical substance. The physical world, the world of appearances experienced through the senses, does not harbor reality. This tangible world is an imperfect reflection of the universal world of Forms. Human observations based on these reflections are, therefore, highly suspect. At best, the tangible fruit of any human labor is "an indistinct expression of truth". Because knowledge of truth and knowledge of good are virtually inseparable to Plato, he counsels rejection of the physical in favor of embracing reason in an abstract, intellectual, and ultimately more human, existence. Art is removed from any notion of real truth, an inherently flawed copy of an already imperfect world. Art as an imitation is irrelevant to what is real.

For Aristotle the world exists in an infinitely diverse series of parts. These various parts are open to human observation and scrutiny. Rather than an eternally regressing truth beyond the scope of human apprehension, knowledge of truth and good are rooted firmly in the observable universe; truth, or at least gestures toward it, lies in existence rather than essence. Aristotle encourages embracing the particular in order to possibly gain a sense of the universal. There is, however, no universal system of inquiry to investigate each part of the whole. Different parts require different methods of discourse.

The old battle between those who favor a substantive view of the universe based upon an ontological perspective,  and those for whom a more cautious epistemic or skeptical approach is warranted, based as it is on knowledge and its justification, seems once again to be surfacing within many of the heated debates within both academia and the blogosphere among divergent philosophical speculators. As an independent researcher with no academic accreditation to speak of I have often wondered why there is so much animosity springing from otherwise sane and honorable partisans of this ancient art of wisdom.

Out of the shambles of what was once termed speculative realism there is a growing division between various segments of this strange philosophical movement (if we can still call it that?). Most of us know the basic history of this movement from the wiki blurb:

"Speculative realism is a movement in contemporary philosophy which defines itself loosely in its stance of metaphysical realism against the dominant forms of post-Kantian philosophy or what it terms correlationism. Speculative realism takes its name from a conference held at Goldsmiths College, University of London in April, 2007. The conference was moderated by Alberto Toscano of Goldsmiths College, and featured presentations by Ray Brassier of American University of Beirut (then at Middlesex University), Iain Hamilton Grant of the University of the West of England, Graham Harman of the American University in Cairo, and Quentin Meillassoux of the École normale supérieure in Paris. Credit for the name "speculative realism" is generally ascribed to Brassier, though Meillassoux had already used the term "speculative materialism" to describe his own position."

We've seen the great divisions between the disparate parties as they have over the years battled for and against each other and their respective approaches of  epistemological or ontological realism; and, even segmentations within each of those camps over various processual or substantive approaches. For a long while I have watched from afar, so to speak, trying to be fair and balanced in my appraisal of the various philosophical trends within each of these camps. I've kept my own thoughts low key and to myself for the most part seeking wisdom rather than some vain and ego bound defense of "truth". Does anyone have a solid approach to reality? Will we forever be at loggerheads? Socrates pleaded ignorance, not knowledge or justification; and, most of all he never told us what reality is. Instead all he had was questions, and more questions, and the ability to listen: most of all to listen to what others had to say about such things. Socratic irony, the elenctic method: a form of inquiry and debate between individuals with opposing viewpoints based on asking and answering questions to stimulate critical thinking and to illuminate ideas. It is a dialectical method, often involving an oppositional discussion in which the defense of one point of view is pitted against the defense of another; one participant may lead another to contradict himself in some way, thus strengthening the inquirer's own point.

I often wonder at philosophers on blogs, wondering why the methods first established by Socrates, and emulated by Plato in his dialogues, have yet to catch on in our day to day handling of each other on the web. Instead, what I find most often is embittered invective and viturpation, castigation and anathema, rage and spite presented as sane comments on many blogs. I see that many academic philosophers disparage blogging altogther without realizing that this is still the most open marketplace (Agora?) in the history of the world for sharing our thoughts on thinking and being invented to date. What happened to civilized debate? Or was this an illusion all along? Not everything has a perfect answer, and the Socratic method of eliminative questioning has its logical limits, yet the basic idea of realizing our ignorance and our ability to open ourselves to differing views without reaching after hard fact or reasons is a sign of someone who can learn and listen carefully before making false judgments based on faulty reasoning and invalid methods. That Socrates approach was based upon a maieutic or epistemic perspective is well known. Maybe we all need to question the deep seated superstitions that still hold sway within each of our own minds.

Back to Quentin Mellassoux's Berlin Lectures (read here: pdf!). He has now divided the original four members of the speculative realism movement into two basic camps which he defines as the anti-materialist or subjectalist camp (Iain Hamilton Grant and Graham Harman), and the neo-materialist camp (Ray Brassier and Quentin Messassoux). What both camps have in common he tells us is their appreciation of realism. He calls realism a position which to "accede to an absolute reality": the speculative position itself. Yet, among these speculative realists there are those that believe in non-material entities and those that do not. This is the subjectalist and the neo-materialist stances, respectively. The heart of his argument is with the subjectalist approach best typified in his reading of Graham Harman's Object-Oriented Ontology (Iteration, Reiteration, Repetition: A Speculative Analysis of the Meaningless Sign Freie Universitat, Berlin, 20.April 2012): 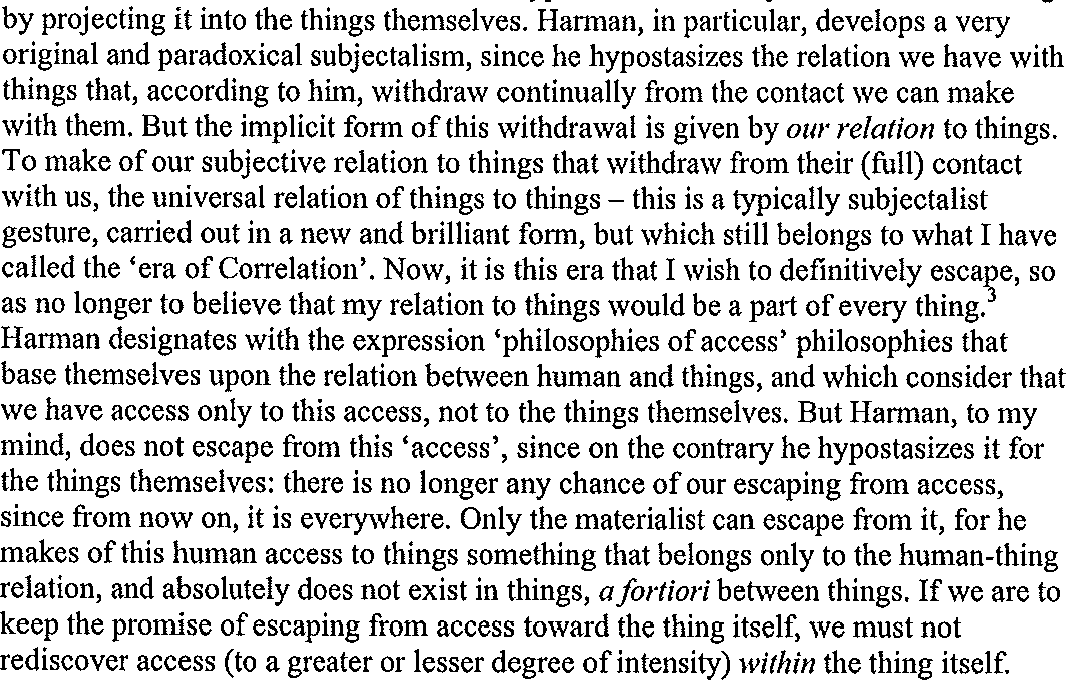 Now whether this is a fair and accurate reading of Harman's work is not the point. The point is that we have a division, a formation of difference, an alignment or decisional judgment on the part of Meillassoux to demarcate or mark his position in reference to what he sees as a counter to his own speculative enterprise. His enterprise takes an epistemological turn centered in what he terms 'correlational facticity': for correlationism to be able to undertake a de-absolutizing of thought, it must maintain that correlation is not necessary, and that this absence of an absolute necessity of correlation is accessible to thought - that one can justify it through an argument, that it is not simply posited as an act of faith (8). He goes on to say that this "thinkable non-necessity of correlation is precisely what I call 'correlational facticity'. The thesis of correlational facticity is thus as follows: thinking can think its own absence of necessity, not only qua personal consciousness, but qua supra-individual structure. It is only on this condition that correlationism can claim to think the very possibility of the unknowable entirely-other of correlation."(8) His answer to how this can be justified is to emphasize the the 'lack of any reason' for correlation itself. In pursuit of his goal to prove the case he discovers that he can only demonstrate a part of it: the necessary contingency of all things. Yet, as he states his demonstration offers only one conclusion: to produce and empty sign one must have access to the "eternity of contingency" (the real world of material things). But this is only an ontological proof. In his mind he believes he also needs an epistemological proof and justification for his ontological proof, one that will allow for the goal of a "deutoro-absolutizing import of mathematics"(37). What he wants more specifically is a "description of the world independent of thought". Instead all he has is a "mathematics capable of not speaking of anything - sense if is founded upon meaningless signs".(37) He concludes with a paradoxical situation and quandary, stating:

"The new puzzle that appears before us is the following: how can a meaningless sign allow us to describe the world, without becoming once again a meaningful sign, and thereby capable of referring to a world outside of it? How through what paradox, can we hope that a meaningless sign could not only have a referent, but a (deutero) absolute referent, more radically separate from us than every correlational apprehension?"(37)

Unlike the Gordian knot of fable and myth we cannot like Alexander cut the knot in half and move on to conquer the truth of this paradox, instead we must all learn to love wisdom enough to come together, to reason together, to open dialogue with each other and find a middle-ground that might just help us reach both an ontological and epistemological conclusion to this strange strangeness.