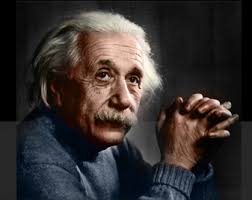 "I am convinced there is only one way to eliminate these grave evils, namely through the establishment of a socialist economy, accompanied by an educational system which would be oriented toward social goals. In such an economy, the means of production are owned by society itself and are utilized in a planned fashion. A planned economy, which adjusts production to the needs of the community, would distribute the work to be done among all those able to work and would guarantee a livelihood to every man, woman, and child. The education of the individual, in addition to promoting his own innate abilities, would attempt to develop in him a sense of responsibility for his fellow men in place of the glorification of power and success in our present society."

"Nevertheless, it is necessary to remember that a planned economy is not yet socialism. A planned economy as such may be accompanied by the complete enslavement of the individual. The achievement of socialism requires the solution of some extremely difficult socio-political problems: how is it possible, in view of the far-reaching centralization of political and economic power, to prevent bureaucracy from becoming all-powerful and overweening? How can the rights of the individual be protected and therewith a democratic counterweight to the power of bureaucracy be assured?" 1